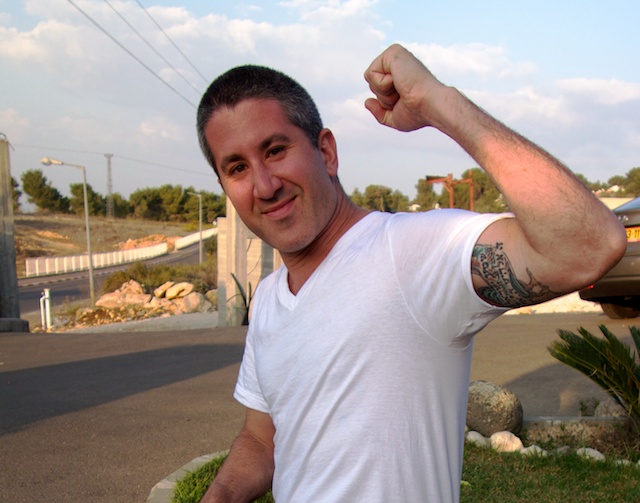 An unsurpassed review of Zahav in Eater (see below). I was introduced to Michael Solomonov, who I took to Israel to be the chef/guide of my film The Search for Israeli Cuisine, by Lior Sercarz, the master spice blender of La Boite in New York’s way westside. He told me that if I wanted to eat the best Israeli cuisine in America, I must go to Zahav. Bill Addison, the Eater writer in search of the best restaurants in American certainly backs Lior up, as he eloquently writes below. It took just fifteen minutes sitting with Mike and I knew he was my guy. He’s knowledgeable, insightful, funny, and self-deprecating. And, his food is off the charts. He was a pleasure to work with – 20+ days shooting together at over 100 locations all over Israel – and we still love each other!

There’s another connection too. Dorothy Kalins, who is producing Mike’s book (Houghton Mifflin Harcourt) out next year, doubles as my wife. She created Saveur magazine and now produces cookbooks including three books by famed New Orleans Chef John Besh, The Gramercy Tavern Cookbook by Michael Anthony, also chef Anthony’s new book V Is for Vegetables, which just finished photography yesterday in our apartment, and Hero Food by Seamus Mullen of Tertulia fame in Greenwich Village.

I think you’ll like the film coming out next Spring; I know you’ll love Mike’s cooking. Do not pass go. Head straight for Philly. The problem is where do you go? Fried chicken and donuts at Federal Donuts? Dizengoff? Zahav for sure!

Michael Solomonov [Photos: Bill Addison]Restaurant Editor Bill Addison is traveling the country to chronicle what’s happening in America’s dining scene and to formulate his list of the essential 38 restaurants in America. Follow his progress in this travelogue/review series, The Road to the 38, and check back at the end of the year to find out which restaurants made the cut.What is Israeli cuisine? The food at Zahav offers the most thorough and sensuous answer in America. Israel’s cooking is the melting pot of the Middle East; a glance at Zahav’s selections of hummus begins to tell the story. First up is the ubiquitous version, whipped with tahini and emboldened by garlic, lemon juice, cumin, and olive. Another includes foul (fava beans), a popular variation in Palestine and an ancient favorite in Egypt. The can’t-miss riff, though, hails from Turkey: It arrives warm and sunny with melted butter. The bread served alongside, pulled fresh from the wood-burning oven most nights by chef and co-ownerMichael Solomonov, is the pita-like Iraqi laffa.Order hummus with salatim, small plates of salads that often begin meals in Israel, and in the mix appear carrots glazed with North African harissa and tabbouleh in the Lebanese style, heavy on the parsley. The region may face constant political strife, but on the plate unity reigns.Now look more closely at the list of twenty or so mezze and grilled dishes. Woven among the Yemenite beef stew and fried cauliflower with herbed labneh (strained yogurt) are gems like house-smoked sable, paired with an oozing fried egg over a block of rich challah, and sweetbread schnitzel contrasted with piquant beet-brined egg. They harken to the Ashkenazi Jews of Eastern Europe who migrated to Israel (and who also, of course, informed the classic flavors of the American delicatessen).

And a filling of spiced chicken, apricots, almonds in the savory pastry called pastilla brings to mind the cooking of the Sephardic Jews who established themselves around the Mediterranean’s western shores. Zahav makes no overtures about keeping its kitchens kosher, but incorporating the far-flung tastes of the Jewish diaspora into its menu illuminates the breadth of modern Israeli cooking.

Zahav is Solomonov’s tribute to his homeland. He was born near Tel Aviv and then grew up in Pittsburgh. His family returned to Israel when Solomonov was a teenager, but he soon came back to the States to complete high school. Though he and business partner Steve Cook have triumphed with their growing Federal Doughnuts concept (doughnuts dunked in the fryer to order, plus killer fried chicken for lunch), Solomonov stays close to his roots. In mid-August he’s opening a hummusiya called Dizengoff, and he’s working on a documentary to air on PBS next year called The Search for Israeli Cuisine.

With a cookbook also scheduled for next year, Solomonov is poised to be the U.S. equal to Yotam Ottolenghi. The wonderful thing about Zahav, though, is how easily one can disappear into the food’s earthy pleasures without knowing any of the chef’s background or the cuisine’s history.

After scraping the hummus bowl clean with shards of laffa, move on to gratifiers like griddled cubes of halloumi over molten date chutney with wisps of pickled onion and flashes of urfa, a smoky Turkish chile. Sip limonana, a minty lemonade, on its own or as a Jim Beam-fueled cocktail. Take a leap and try the duck hearts angled over a celery puree and matched with amba, a mango pickle. Come with a group and preorder an off-the-menu specialty—lamb shoulder smoked, braised in pomegranate juice, and served with tahdig, the irresistible Persian pilaf in which the rice is cooked to chewy crispness on the bottom. Leftovers are all but guaranteed.

The restaurant, perched over a cobblestone street in Philadelphia’s historic Society Hill neighborhood, evokes the Levantine landscape with sandstone walls and limestone tiles but isn’t over-designed. It sets a welcoming mood, an impression reinforced by the hospitable staff. Ten years from now, upscale-ish Middle Eastern restaurants may be a cliche; we may grasp Palestinean fava bean hummus and Lebanese herbed labneh with the same intimacy that we know Neapolitan pizza and Ligurian pesto. But in this watershed moment, when the distinct but tangled flavors of the region’s many cuisines begin distinguishing themselves in our dining culture, we’ll look back at Solomonov’s Israeli breakthrough and say: Zahav was the one that upped the game.

Zahav237 St. James Place, Philadelphia
215-625-8800
website
Open for dinner Sunday – Thursday 5 – 10 p.m., Friday – Saturday 5 – 11 p.m.
How much does it cost?: Hummus $8 – 12, mezze (small plates) $10, grilled dishes $14, desserts $9.
What to order: Start with salatim and hummus. Look for mezze like fried cauliflower with herbed labneh, sweetbread schnitzel, and house-smoked sable over challah. For large dishes, try the duck kabob with a Middle Eastern take on dirty rice, or lamb merguez over carrot puree. Konafi—a riff on a traditional dessert with ricotta, shredded pastry, and seasonal fruit for a modern touch—will sate the sweet tooth.
What to drink: Limonana, for example, takes cues from Israel’s minty lemonade but spikes it with Jim Beam. And the Marble Rye is a witty nod to the Jewish deli, made using whiskey infused with pumpernickel and caraway and splashed with celery soda. The jewels of the beverage list, though, are the wines from Israel and Lebanon. They’re difficult to source and so they aren’t cheap, but an informed server can help you make an enlightening choice.
Bonus tip: Tayim, a prix fixe of sorts, is a smart introduction to the food: For $42 per person it includes salatim and hummus with laffa, two mezze, one al ha’esh dish, and dessert.